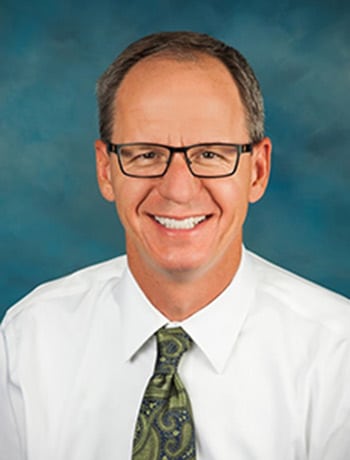 Dr. Paul Quiram graduated from St. John’s University in Collegeville, MN in 1985 with a degree in Biology. He married his high school sweetheart Mary Beth in August of 1985. He then went on to Dental School at the University of Minnesota and graduated in 1989 the same year that he had his first son Riley.

In June of 1990, Dr. Quiram completed his general practice residency at the University of Washington in Seattle. During his residency he received additional training in oral surgery, anesthesia, and pediatric dentistry. In July 1990, he joined his father Lyle Quiram in family dentistry in Plainview, Minnesota where he worked until 2011. He also maintained an associate professor position at the University of Minnesota Dental School. While in Minnesota, Dr. Quiram served on the southeast Dental Society board, and was a member of the Minnesota Dental Society and the ADA. He also served on the National Evidence based Dental Committee.

In November of 2011, Dr. Quiram sold his practice in Minnesota and his family moved to South Jordan, Utah to spend more time skiing and mountain biking in a milder climate. He worked as an associate dentist and was a dental consultant while in Utah.