Updates from Our Practice

To all our valued patients: we want you to know that despite the COVID-19 virus, we are still here to serve your essential dental needs. We are seeing patients who are suffering with urgent and emergency dental issues like severe pain and discomfort, infection, toothaches, dental trauma, cracked, fractured or broken teeth and denture adjustments and repairs. Our office hours are changing daily, to accommodate the needs of our patients. Please call us to schedule an appointment.

Don’t Fear the Root Canal! Your Dentist in Westminster Explains Why 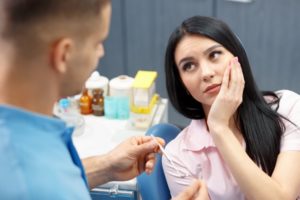 Many people have a poor perception of root canals because it’s typically associated with pain or discomfort. However, the reality is that your dentist in Westminster takes many precautions to make your root canal treatment as comfortable as they can. People don’t realize that it’s not the treatment itself that causes pain, but rather the post-procedure that involves some soreness.

Regardless, the alternative is to allow your tooth to go untreated. Not only will this guarantee pain in the future, but you’ll be putting your gum tissue and remaining teeth at risk. To avoid these complications, take a moment to learn what to expect during and after a root canal procedure.

Root Canals are For Treating Current Pain, Not Causing It

Did you know that root canal treatments save an estimated 24 million teeth a year? That’s nearly 24 million people being treated for pain caused by infected tooth pulp. Without removing this infected or damaged tooth pulp, you’re more likely to experience pain and even put other teeth at risk. Eventually, the entire tooth will need to be removed if the infection spreads.

Instead of pulp, your inner tooth will be filled with a rubber-like material called gutta percha, allowing you to conduct the basic functions you do regularly. This means chewing, brushing, and talking won’t cause jolts of pain commonly associated with infected tooth pulp.

What to Expect During Your Root Canal

According to the American Association of Endodontists, most patients actually feel little to no pain whatsoever during a routine root canal procedure. At the start of any root canal, your dentist applies a numbing application to your tooth and surrounding gums before any incisions are made. Numbing agents such as Novocain or a similar anesthetic will work sufficiently to make you comfortable.

Keep in mind that a root canal is not the same as getting a filling or crown placed. You may experience some mild discomfort during, but that doesn’t mean you can avoid the solution to your problem entirely.

The pain that people associate with root canals is far more common in the time after the treatment is already complete. Post-procedure symptoms usually entail soreness in the mouth, but this common for many oral surgeries, not just root canals. Patients can expect some pain and sensitivity after a few days, but this can easily be treated with over-the-counter pain relievers (aspirin, ibuprofen) or a prescription medication.

However, if pain doesn’t go away after a few days or it returns months after the procedure was finished, you’ll want to see your dentist in Westminster right away. It’s a sign that a new infection has appeared and will need to be addressed.

Once the pain subsides, make sure to take practice proper oral care at home! Also, make sure to schedule your regular dental exam and cleaning today!

Dr. Terry Batliner is passionate about helping other communities prevent tooth decay and helping them treat it when it appears. After earning his Doctor of Dental Surgery degree, he opened multiple practices in Colorado, including in Westminster. There, he practices many forms of dentistry with his colleague Dr. Courtney Bourret. To learn more about his endodontic treatment and practice, contact him at (303) 460-9000 or visit his website.

Comments Off on Don’t Fear the Root Canal! Your Dentist in Westminster Explains Why

Sorry, the comment form is closed at this time.